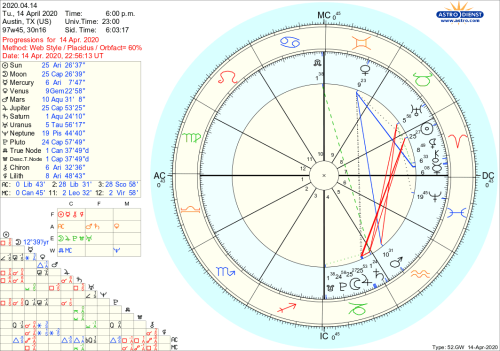 This week, the luminaries are synchronized in an interesting way. The moon is visibly moving through the lineup of planets in Capricorn and Aquarius. Early this morning, I captured this image. Pluto is there too, but we cannot see it. From right to left, we have: Third Quarter Moon, Jupiter, Saturn, and Mars. 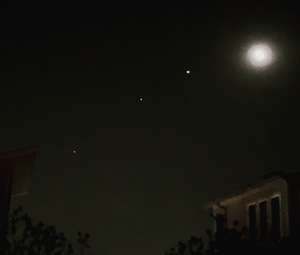 At the same time, the sun is squaring this lineup. The moon will pass through in 2-3 days, but the sun will take more than a week to do the same.

Since the lineup of planets in Capricorn and Aquarius seems to be most related to what we are experiencing these day, I wouldn’t be surprised if this week holds some intriguing news. I cannot even begin to imagine what it might be, but we’ll see. Another possibility is the outside events may bring up or inspire something very personal for some.

I did a birthday reading for my brother, and an interesting thought came through. I think it can be especially useful for this time.

Instead of viewing something as in the way, consider it on the way!

Changing that one little letter makes a huge difference. Many might consider this time filled with things that are in the way…as impediments between where you are and what you desire. When you change your perspective and consider them on the way, you open up to the idea that not only is what you desire possible, it is through all that is happening now. That also means that what is happening now has gifts to offer.

This morning, I did a reading for myself. I was writing whatever came to mind as I considered it. At one point, I remembered the message above and reflected on it. And then I noticed the very next card.

is a very evolved way to live. The way I see it, the message is to let the Universe drive. Let the Universe show you the way. Let the Universe take you there. Even more than the above, it recommends that we sit back and enjoy the ride, relax and watch the beautiful scenery float by. You are on the way, so enjoy the movement!

The last card in my reading was The Magician. I am not sure the message I received goes with all the rest, but I’ll share it anyway.

The Magician is shown with one arm up toward the sky and the other pointing down toward the earth. The message I received recommended only putting one arm up. I think this message is primarily metaphorical, but sometimes literal.

I don’t really like speaking much about high vibration versus low vibration. The reason is, there is too much temptation to judge the one as good and the other as bad. The better way to look at it is to compare a stone or a piece of wood to a ray of sunshine. You can’t live inside of a ray of sunshine, but you can build a home out of stones and wood. Each serves a purpose.

However, the terms high and low can be helpful simply because we have those directions so ingrained in our thinking.

The directions the Magician points in are thus useful symbolically. He reaches up into the higher vibrations with his right hand. His intention is to realize those vibrations, to manifest them into physical form or experience. That, after all, is his specific desire.

The first part of the message was this: when you throw both of your hands into the air, you move a bit too quickly into the higher vibrations, which you are not ready to sustain. The rising up is quite a pleasure, but in this way, there must also be a falling back.

Instead, if you only put one arm up, you can reach those vibrations above you, while also grounding them through your body into the earth below you. As the vibrations move through you, that is experience.

What naturally occurs is your movement up. The more you move a higher vibration through you, the more you are able to sustain it. Eventually, it manifests into form that you can stand upon.

If you look at it this way, everyone is ascending simply because everyone is manifesting. There are no exceptions. Every single person is moving through experience and at the same rate (one second at a time).

There is nothing wrong with throwing both of your arms up and jumping into peak experiences, then falling back into a hangover, recovering, then doing it again. Many people really enjoy living life this exact way.

The Magician merely suggested to me another way, the middle way, which resembles Temperance.

This is a message I have received many times before. I think it showed up now because I have been specifically desiring a more even flow in life. I have lived most of my life by taking three steps forward and two steps back. I have no regrets, but one step forward at a time just sounds more appealing to me now. It also feels like this time is an ideal time to practice that. It is the way The Fool lives and the way life is experienced riding on The Chariot.

1 thought on “Third Quarter Moon and other Musings”