For love or money. What other motivators are there? [Well, there’s always power and sex… Hmm…]

If I write the phrase, “’Til death do us part” you know exactly what I am referring to. But what you might not know or think about is that this phrase is very Scorpionic (to coin a word).

Scorpio is the Fixed Water sign that the sun traverses from about October 22nd to November 21st. Not surprisingly, Halloween and 11/11 both occur during Scorpio. It is also when we switch back to standard time here in the US and other places. Scorpio is thus when we are reacquainted with the darkness. This is apropos since the modern ruler of Scorpio is Pluto, the god of the underworld.

The astrological house associated with Scorpio is the 8th house – the house of “other people’s stuff”, sex, and death. [I always say, you’re never more involved with other people’s stuff than when you’re sleeping with them.] Scorpio and the 8th house are also about mergers. So, marriage and “‘Til death due us part” have Scorpio written all over them.

This year, I am celebrating Scorpio with a sale partly because it ought to be more Scorpionic than usual, especially in the very first week. Let’s consider what that week looks like:

10/22/2012: At about 7:20 pm Central time, the Sun enters Scorpio. Hours later (early the next morning), it makes an exact (water) trine to Neptune. Neptune is a deep-sea diver – being ruler of the oceans, so this sets the tone right off the bat for the month of Scorpio Sun. 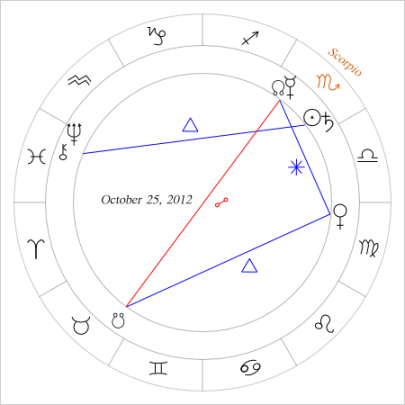 10/25/2012: Early Thursday morning (Central Time), the Sun exactly conjuncts Saturn, which entered Scorpio a short time ago. This conjunction will still be within orb (though releasing) the trine with Neptune as well as within orb (and building into) a trine with Chiron.

If nothing else, this will make things more serious than the already serious Scorpio sun is.

On this same day, two other significant alignments occur both related to Scorpio:

This month of Scorpio is not just about the here and now, but will setup things that span well into the future! 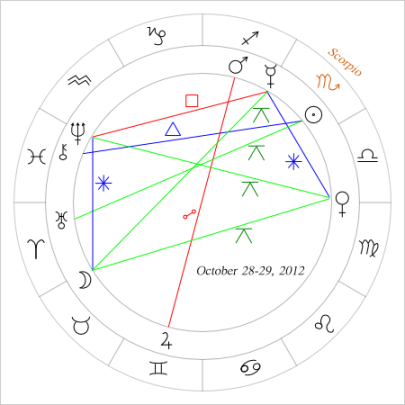 10/27-28/2012: Venus and Mercury change signs (into Libra and Sagittarius respectively) which has them interacting with both Neptune and the Moon. Meanwhile Mars in Sagittarius exactly opposes Jupiter in Gemini and the Sun exactly trines Chiron and then later quincunxes Uranus. The days surrounding this time ought to contain a charge much like those dry, winter days when you get shocked  every time you touch something. I suggest grounding as frequently as possible during this time period.

And all of that is just in the first week! On 11/6/2012 [Election Day in the US] Mercury stations and goes retrograde eventually reentering Scorpio. And a week later on 11/13-14/2012, the Scorpio New Moon will form a Total Solar Eclipse, further emphasizing the depth and impact of Scorpio this year. Wow!!! Should be an exciting ride to say the least.

So, what could some of this mean and what does it have to do with Love or Money?

Let’s start with the love part. Ideally, a marriage starts with love. This, of course, is not always the case. In fact, some populous cultures on this planet arrange marriages and thus don’t start this way at all. Yet, for many of you reading this, that’s likely the way you would want it, a marriage that stems from love.

Well, one planet associated with love is Venus and since Venus sextiles the North Node of the Moon and Mercury – both in Scorpio – this will have us thinking about love to start the month of Scorpio. In fact, Venus made a previous exact sextile with Mercury back on the 16th of October and has been shadowing him ever since. What I mean by that is they are moving at nearly the same rate and therefore have been at the same degree of their respective signs the whole time and through the latter part of October. Under this configuration, our minds have likely been stuck on love. Yet with the Nodes of the Moon in the mix, we’re likely thinking about old loves and future loves alternately. Sort of like filtering through memories of love with the hope of bringing together the best of the past into the future.

Scorpio in general is not the best time to meet someone; rather it is a great time to take an existing relationship to the next level. But who knows. If you do meet someone during this coming month, it might be someone you’ve known before (past life or past in this life) and maybe things will come together quickly. With Mars in Sagittarius, this definitely could happen. However, with Mars opposed to Jupiter, if it does happen, it’ll likely overwhelm you at the start. Worry not and simply slow things down as much as possible. Call on Saturn; his role is always to slow things down some.

Now on to the money part. Venus, ruler of Taurus and the second house, does have a connection to money. That is because she rules values, what we value, and therefore money – our current systemic measure of value. I personally do not like money as a measure of value because, to me, values are very personal, where as price is not. We all pay the same price for many things that we value differently. But I digress.

So Venus has a connection to money, but so does Saturn. Saturn is the ruler of Capricorn, another earth sign, and one that happens to be very good with money. But get this: Saturn is in Scorpio, which is ruled by Pluto (in modern terms) and Pluto is in Capricorn, which is ruled by Saturn. This arrangement is called Mutual Reception and any time two planets occupy each other’s ruling sign they are in cahoots. In fact, they can seem like they are in each other’s place. So, for the next 2+ years that Saturn is in Scorpio, it’ll feel like it is also in Capricorn. And Pluto will feel like it is in Scorpio too. And given what they rule and how, values, money, and power, and all institutions and systems built around values, money, and power will be affected. More than likely, we’ll all feel this one way or the other.

Now one date that absolutely blows my mind is 12/30/2012. On that day, the Sun will exactly conjunct Pluto at the same time that Pluto (and the Sun) sextile Saturn. That’s three very powerful orbs all in harmonious alignment! In fact, on that same day, nearly every major orb in the Zodiac will be in a power position!!! I guess if we’re still around after 12/21/2012, that will be the next interesting day to watch for.

But back to October and the imminent (and eminent) sign Scorpio. This is a time of year when our gut sensor is most powerful. You’re gonna feel stuff; you’re gonna want stuff; your desires are going to tug and pull at you right at the same time that your fears do. We love to get scared in a movie theater or a haunted house, but less so in our homes in the dark. But remember, the point of the darkness is to exercise the senses that are otherwise dominated by sight. Your eyes deceive you as they only show you an illusory reality. For the next 30 days, pay them less mind and give your gut more of your attention.

And, by all means, take advantage of my sale and services which is all about expanding awareness of the subtle forms of guidance! 🙂 The Veil is thinner in Scorpio, so why not reach through it some!

3 thoughts on “For Love or Money”