Early Saturday morning, Mars made an exact aspect to Neptune (sextile). The driving force of the impetuous soldier pierced the veil allowing the viscous fluid of the intuitive to seep out into the open. When you look into the dark liquid, what do you see?

You are huddled together with loved ones who arrived early in anticipation a holiday you weren’t sure would occur. That was before the great disconnect happened. Now, you can only communicate with the ones you’re with. Many finger their phones wondering whether they’ll ever be used again.

Twelve hours pass. It is 11:50 am and nothing has changed: no resolution, no information, but no Armageddon either. The air is calm and clear. The sun is low in the sky due south on this the onset of winter. Everyone is calm and hopeful despite the lack of electronics.

And then, ten minutes later, you notice. The daylight shifts and strobes. You look up at the sun just in time to see it. Something moves along the surface. For the first time in your life, you can stare at the sun – directly. There’s no glare, reminiscent of the full moon except pulsating as if you’re tripping on acid.

And then, in a green flash, it goes dark.

Your brain cannot comprehend the discontinuity and you don’t trust your eyes. You squeeze them shut and reopen them, again and again. You shake your head, tap on it, but the scene does not change.

Were it not for the stars, you would have gone out of your mind already, but the display is awe-inspiring. Even your nights away from the city cannot compare to the abundance of stars you now witness. The beauty distracts you from what happened, but then you remember where you are, what you were doing, and the time of day. The tolling of the nearby clock tower has not even ended yet. It is noon on the most anticipated winter solstice of your lifetime.

Time stops, or stretches, or seems to. With mouths agape, not a soul utters a word. This is no coincidence. Somehow, the signal processing in the brain is not normal and no longer supports speech… or screams. Good thing.

In fact, struggling to retain lucidity, some peer down at their hands and feet, willing them to move, but to no avail. The sensation is not paralysis, but disassociation. Each feels their arms and legs move, but do not witness the body complying.

The twelfth toll chimes, fades, but does not end. The tone that remains catches everyone’s attention… eventually. It shifts from the reverberation of a bell to an electronic hum. Those who have lived near the sea are reminded of modern lighthouse tones (quite different than the traditional foghorns).

And then is heard, although not audibly, “Fear not; this is only a test.”

Like a Total Solar Eclipse, it is all over too soon, except for those whose beliefs kept them in fear. Yes, it was frightening, but for some the other-worldliness of it quickly became soothing. Once the sensation of falling (or failing) is accepted, the weightlessness of it all can be… titillating.

The light returned as if it had never left, though it is indescribably different. Many mourn the loss – though of what they do not know. Bellies churn and some fall to the ground to empty their stomachs. Only then do they realize they have regained mobility.

“This is only a test. Had there been a real emergency, further instructions would follow.”

Intuition is an amazing thing, no matter how challenging it might be to rein in. A while after publishing the last post, I got that some were fretting over the part where I said I can’t see what’s coming. My hunch was later confirmed. I need to take back that one sentence. In truth, I haven’t been asking about 12/21. So it is only fair that I do so now and publish the results.

Before I get to the reading itself, I have to show you the cards that ended up on the bottom of each stack after the cut. What they show are the two sides to the story.

The Tower represents abrupt change, chaos, and catastrophe. Clearly, many of the predictions of what’s ahead fall under this archetype. I am not surprised that The Tower showed itself since it is very much on our minds.

What is more interesting to me is the second card. The 7 of Swords is about deception. I don’t know about you, but I often wonder how much deception is at play these days, and not just with 12/21. If you read alternative press, you can’t get through a page without hearing about ‘the powers that be’. Conspiracy seems to be everywhere you look. So it is interesting that this ended up at the bottom of a pile too.

Keep this in mind: since these two cards showed themselves as they did, they are not part of the outcome. They are what we’re questioning.

Now on to the reading. 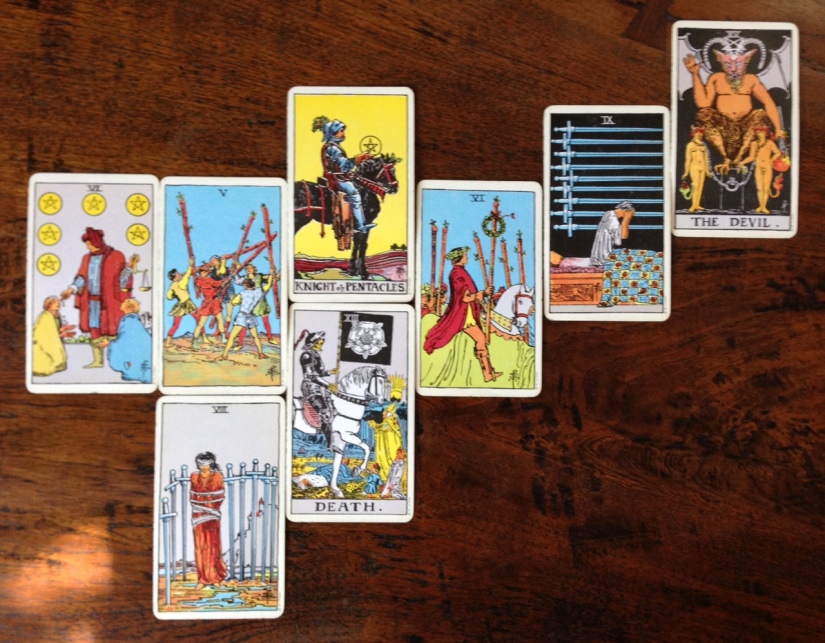 You will be interested to know that I titled this post before pulling cards. [That’s because the past 24 hours put me through a doozie of a test and it got me thinking.] Well, how appropriate that the 5 of Wands – the card of tests and challenges – showed up front and center! We are being tested, but is the test going to be how we respond to 12/21, how we pass 12/21, or how we anticipate 12/21? I think it is the latter and I’ll explain why.

The underlying card is the 8 of Swords. This card indicates that the worst of our enemies is our own thoughts and beliefs. If you believe you are doomed, then doom you shall experience, eventually. There’s already been plenty of doom on this planet these past few years, so if you go looking for it, you’ll find it.

And then there is perception, more powerful than we give credit. How many times do you see someone fret over some drama that from the outside looks trivial? “Just say no,” you say to them, yet from their point of view, it’s never that easy.

So the test, in my interpretation, is how we choose to perceive reality. The date matters not because there will always be a past and a future to fret over… or not. If nothing happens by 12/22/2012, rest assured that the next date of predicted doom will be announced and then feared.

The 6 of Pentacles in the past – to me – tells us that we each participate in the creating of the reality that we experience. The coins dropped from the man’s right hand illustrate our contribution. The scales in his left are reminiscent of the Justice card, reminding us that all karmic debts are paid – one way or another. Think about the saying, “put your money where your mouth is”. How you spend your money is a great indicator of your beliefs and values. Replace ‘money’ with ‘time and energy’ and you get the rest of the picture. So if there is indeed deception at play, it is simply because we are entertaining it, and passing it along. What we give attention to thrives. That goes for doom and the “external savior” stories alike.

The next three cards intrigue me because they are basically the same image – a being riding a horse to the right (the direction of the future in this spread). The strength/asset card is the Knight of Pentacles. He is a practical and down-to-earth man. He has offerings, but is patient and willing to travel to reach his goals. The challenge card (below him) is Death. Transformation is change that originates from the inside out. We are rather set in our ways, aren’t we?

The initial outcome depicts the 6 of Wands – victory – a battle that is won – a test that is passed. This card is not about miraculous solution or being saved. It therefore is not about the rapture or the arrival of the mothership. The victory shown must be earned through the combination of the Knight of Pentacles and Death. The Knight is not King. He has much to learn and experience before his is ready for the throne. Through his journey, intention, and experience, he can transform into the King (or Emperor, or Magician, etc).

The Guide card is the 9 of Swords – nightmares, worry, and concern. There’s none of that going on right now, is there? Notice that the 9 of Swords is what follows the 8 of Swords. Again, if you believe in monsters, then you’ll have nightmares about them. But if the monsters we believe in are hidden in the subconscious, then the nightmares are needed to reveal them. That’s the guidance here: be mindful of your nightmares. If need be, go all the way back to the 7 of Swords to find where you were deceived. [Oh, that’s good! The reading is really coming together now.] When you uncover fears, know that this is the first stage to healing them.

And finally we arrive at the higher outcome – The Devil. I see the Devil as the earth realm – the pleasure and the pain of it all with its attachments and encumbrances. Sorry to say, we’re not getting on the mothership, or teleporting through a wormhole to a new pristine planet. We have a wonderfully beautiful globe beneath our feet. She is not doomed, but she does need some TLC. And we all have to learn to live here together or it’ll kill us. The Devil’s chains not only represent the gravity that keeps us here, but also the metaphysical bonds. Karma and Cause and Effect are not soon to die – in my view.

So, fear not, this is only a test. As I see it, there will be real life challenges to contend with, but life will continue on planet earth, and victories will be had if we choose them.