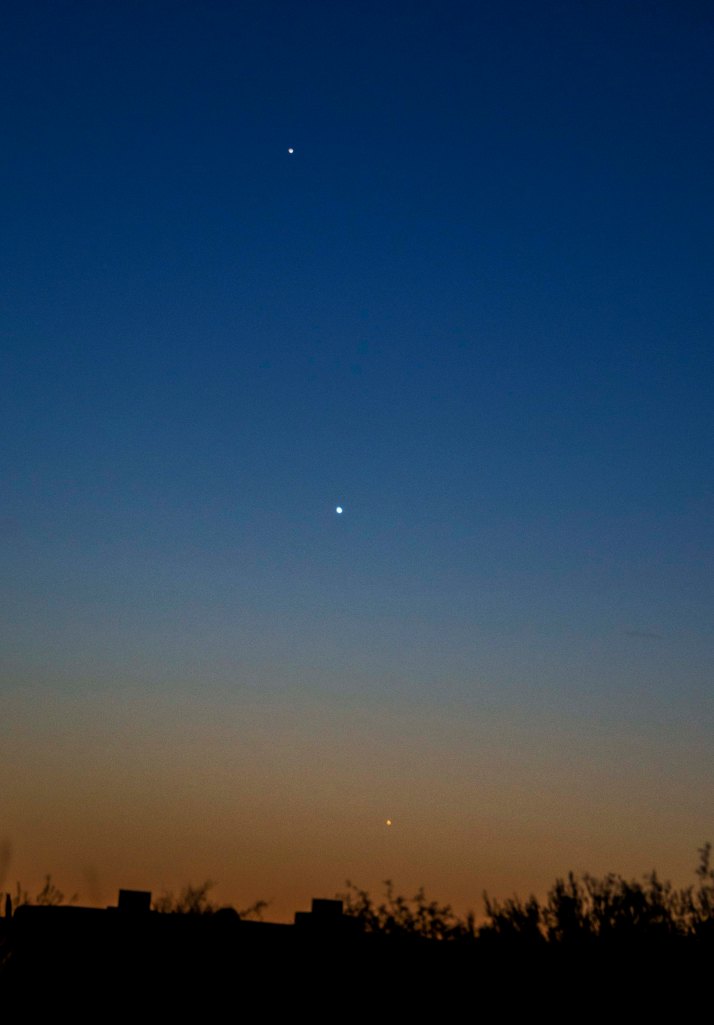 I found this picture via spaceweather.com. (Click on it to go there.) It is pretty much the same scene that I saw.

Last night was the first clear night in Austin since the 26th when Mercury, Venus, and Jupiter formed a triangle. They are now, quite literally, aligned (in a line), well visually anyway. Mercury is highest, Venus is in the middle, and Jupiter is lowest.

At times like this, the ecliptic is most conspicuous. The closer to the equator one is, the more verticle the line. If you surf the web and look at various pictures of this alignment, you will notice how the angle changes from one shot to the next.

At the moment, Jupiter is moving the slowest (Astrologically). It is 13 degrees ahead of the sun, but the sun is gaining nearly a degree each day. That is why Jupiter looks lower and lower every evening. The sun will catch up and then pass Jupiter on June 19th.

Mercury is still moving quickly ahead, but not for long. When it gets this far in front of the sun, it begins to slow down in preparation for its next turn around. Mercury is already in Cancer, where it will be until the 8th of August. Mercury Retrograde starts on June 26th and ends on July 20th.

Those of you who like seeing planetary lineups in they sky, will have to get up early next month. We’ll have another 3 planet lineup, but this time in the early morning pre-dawn sky. The best morning will likely be July 21st when Mars and Jupiter conjunct, and right after Mercury stations direct (and is thus furthest behind the sun).

Now that we are into the first weeks of June, we are within reach of a Grand Water Trine. Saturn and Neptune are already Trine at 5 degrees Scorpio and Pisces. Mercury will pass through and Trine both of the others on Monday when it crosses 5 degrees Cancer. Venus will next take its place on Friday. Then on June 26th, the sun itself for form the last corner of the Grand Trine.

Interestingly, Mars will participate, but not harmoniously. Next Friday, Mars will be 30 degrees behind Venus and thus square to Neptune and Quincunx with Saturn. Ultimately, I think Mars will simply help us utilize the Trine better by nudging us along.

I’ll put up a chart or two next time with some further analysis.