So, I just got back from Africa, by way of Europe, and it was an AMAZING trip! Oh, you didn’t know I was going? Well neither did I. The whole trip lasted less than 18 hours. For the record, my body didn’t travel anything more than about 10 blocks, but my heart and my spirit soared!

First thing yesterday morning, The Farsight Institute announced their results of a remove viewing project that took about a year to complete. It was all about the Great Pyramid(s) of Egypt…you know, the same as on the cover of Journey to the Temple of Ra! I watched their 40-minute teaser video; it is interesting, but not anything unexpected for me.

Next stop was Switzerland. A good friend of mine that lives there wanted to do a reading for me and to catch up some. We had made a phone date a bit earlier. It was a great chat and I’m still processing all of the information that was presented. She said this time would be filled with the spontaneous and unexpected. Little did I know it would only take minutes before that started to happen…

After the phone call, I posted yesterday’s blog entry. Within minutes, I got a Facebook message from a friend…actually, someone I have been connected with for years, but whom I’ve never met. His name is Jonathan Orchard and he is a brother in spirit. Some years ago, I saw one of Jonathan’s videos and saw the genius in it. You can find a video of the same song on his website, although a different version than I had seen. The lyrics are AMAZING, so if nothing else, go read them; they are written out for you there:

Jonathan and I spoke, via Skype, for the first time and had a wonderful chat. I so look forward to seeing more of his ingenious creations! Jonathan lives in the UK, but if you visit his website, you’ll see that he’s been to Egypt recently and has a picture of himself doing yoga with the Giza Pyramids in the background! Sync-wink received.

Late in the afternoon, I finally got out of the house and cruised South Congress to listen to some SxSW live music. I have to say, this year was one of the best…musically speaking! Everything I heard yesterday was excellent. But boy was I in for a treat for the finale.

The last band I saw last night was Tinariwen, from Northern Africa. Now Northern Mali is not very close to Egypt, but for little ole me in Austin, TX, it was quite synchronistic given the day as a whole. A video, a phone call, and a Skype video chat did a lot to take me far, far away…but there is nothing like good music to send your heart and soul soaring to a distant land. 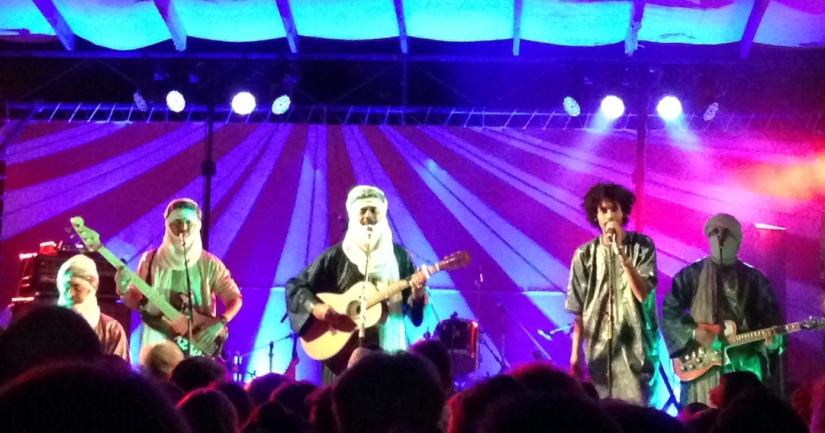 Given it’s a lazy Sunday, have a listen! Here is Tinariwen’s video page where you can sample their work:

It’s gray out and I’m jet lagged, so I think I’ll go there and listen some myself!