This evening, we’re in for a visual treat. The full moon will rise flanking Mars. As the following diagram shows, look ESE around sunset. If skies are clear, you’ll easily spot them. Last night, I was able to see Mars glowing brightly about ten degrees below the waxing gibbous (nearly full) moon. 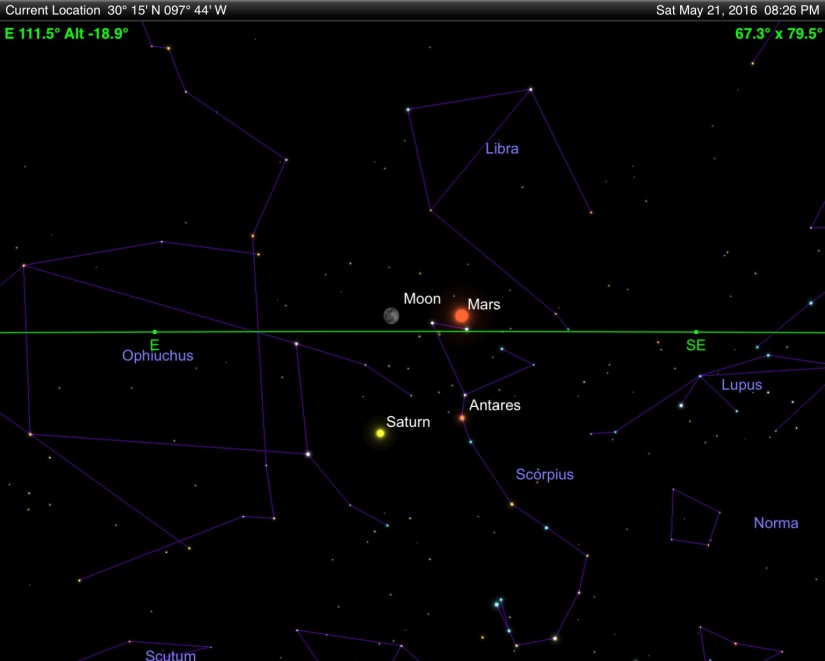 The above diagram is for 8:26 pm CDT in Austin, Texas. The sun sets here at 8:22 pm this evening. Less than one hour later, Saturn will rise below the other two, and can easily be seen in clear skies as well.

The moon is precisely full at 4:14 pm CDT. The exact Mars opposition, which happens once every two years, occurs at 6:16 am CDT tomorrow, almost exactly 14 hours later. Furthermore, Mercury stations direct at 8:20 am tomorrow…and all of this occurs within the first 48 hours of Gemini. The coincidence of events like these are intriguing for sure.

Two cusps are highlighted by these events: Taurus-Gemini and the opposing Scorpio-Sagittarius.

Taurus is the most stable vibe in the Zodiac. Gemini is most certainly the one who likes change more than any other. This cusp can thus be interpreted as a significant release, as when an orchard of trees releases its pollen en masse.

Venus, not wanting to be left out, will oppose Mars three nights later. We cannot see Venus right now as she is still working her way around the back side of the sun. She will conjunct the sun in early June beginning about 18 months as an evening star. This summer, keep an eye out toward the southwest shortly after sunset to spot her.

It is worth mentioning that the Mercury station will aspect both Jupiter and Saturn. To some, the Jupiter-Saturn square is thematic for 2016, especially given that Saturn sits in Jupiter’s home of Sagittarius, which as I mentioned, is highlighted in today’s oppositions.

In my opinion, the energy has been tight and tense since Mars stationed retrograde (about a week before Mercury did). Maybe…just maybe, these oppositions, stations, and sign transitions will give way to some much needed movement. I, for one, have my hopes up!