This coming weekend marks the midway point between when Mars Retrograde ended and when Venus Retrograde begins. I have noticed a theme here, which includes more than just Mars and Venus.

Consider this chart from the morning of September 6th. 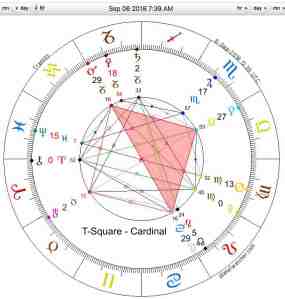 The moon in Cancer was exactly opposite Mars in Capricorn. Venus, in Libra was applying square to Mars, which occurred on September 8th. The three together formed a Cardinal T-Square. Add in Uranus and you have an out-of-sign Grand Cross. [Interestingly, the sun-Neptune opposition bisects the Grand Square right in the middle.]

A quarter of a month (1/4th of a lunar cycle or one week later) the moon in early Scorpio will meet Venus. This happens tonight. [If you have clear skies shortly after sunset, look for it in the West.]

In this next chart, we now see a Grand Cross in the Fixed signs, both Venus and Mars having crossed from Cardinal signs (Libra & Capricorn) into Fixed signs (Scorpio and Aquarius).

It is not often when a Grand Square transitions signs and modes so quickly like this.

Adding to the pattern of late, one month after Venus stations retrograde, the lunar nodes will also retrograde from the Fixed axis of Leo/Aquarius to the Cardinal axis of Cancer/Capricorn.

Uranus, which does not change signs often, recently transitioned from Cardinal Aries into Fixed Taurus. Its Retrograde, happening now, will have it moving back into Cardinal Aries and on the same day the Lunar Nodes transition.

The luminaries (the sun and moon) are always prograde. They thus always transition modes within the same pattern:

Think about it this way:

The Lunar nodes are always retrograde (for the most part). So Mars, Venus, Uranus and the nodes all retrograde from a Fixed sign backward into a Cardinal sign, which is a counter-intuitive progression…and an abrupt change of mode.

One can think about a change of mode like a state change (of matter). Take, for example, a block of ice. Ice, the solid form of water, is like a Fixed sign. The melting of ice takes some time. It is gradual and flows. That is like moving from a Fixed sign to a Mutable sign.

When we move from Fixed to Cardinal, we go from a standstill to accelerating movement abruptly. An example of this that comes to mind is an earthquake. The earth is stable. It takes quite a bit of time for enough pressure to build to break the threshold of friction. However, once this threshold is surpassed, the earth gives way and lunges forward, sending shock waves outward.

Uranus is the planet that comes to mind when we discuss earthquakes. Its vibration is inventive and revolutionary.

Relating to all of this personally, consider the following:

My angles are all in fixed signs. I also have a Fixed T-square. Mars retrograde in Aquarius crossed my Descendant from my relationship/partnership 7th house into my 6th house of service. During that time, I was catapulted into an abundance of activity in the physical dwelling I grew up in, resulting from what was going on with my parents.

Venus retrograde will cross my IC from my homey 4th house to my neighborhood/siblings/ideas 3rd. The IC marks the foundation of a chart and Scorpio penetrates deeply regardless. I am sure I will be working through and processing some of the deeper feelings I have regarding the life changes I went through in August.

Venus Retrograde can bring up nostalgic memories. It can also have you running into people (and lovers) from your past. Mars Retrograde got me in touch with a lot of people, places, and things from my past…all the way back to my early stages of life.

I am not quite sure what Venus Retrograde will stir up within me, but I am looking forward to it. 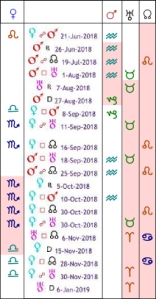 The Astrology is repeatedly taking us from Fixed mode backward into Cardinal mode via these retrogrades. In all cases except the lunar nodes, we will get to flow forward from the Cardinal into the Fixed once again. Mars made that transition just this week (Monday, September 10th). Venus Retrograde starts on October 5th and ends on November 15th. Venus will move forward into Scorpio a second time on December 2nd. Uranus Retrograde ends on January 6th, then moves forward again into Taurus on March 5th, where it will stay until the summer of 2025.

Big changes can take time to develop. The sun and the moon are the only objects in our sky that move solely forward. The rest retrograde and return.

In my early years of Software Engineering, I worked for a visionary named Steffen. He often spoke of “spiral development”. That is the way of the planets…cyclical progression rather than linear. It may feel like we’re just going round in circles some times, but then we notice we’ve shifted (or popped) into a whole new level. This time around, it’s more a pop than a shift.