On the last afternoon of July, a true Texas storm rolled through Austin.

When I first noticed its approach, my house sat along the edge. To the south, I saw nothing but bright sunshine and blue skies. To the north, I saw no blue whatsoever. Above my home, clouds filled the sky. Along the northern horizon, it was an ominous dark blue-grey wall.

I checked the radar and saw that a formidable storm front was approaching, moving from north to south.

I watched the storm approach. I could hear the thunder. I could see the lightning. I could even see what I assumed to be rain about 2 miles from me.

When the storm hit, the winds kicked up, the thunder grew louder, and the lightning bolts grew thicker and brighter. And then the rain poured down from the sky, drenching my balconies, pounding my windows, and rendering my screens impossible to see through. The energy was exhilarating.

The storm lasted longer than I had expected. When I had first looked at radar, the storm was narrow, but as it passed over Austin, it expanded in all directions.

The storm eventually calmed and then passed. I could see patches of blue sky north of downtown as the storm moved southward, but clouds remained in all directions.

There was a true calm after the storm. I went outside to feel the much cooler air. I could see how wet everything was. I saw where things had been soaked through. I saw pools of water everywhere reminding me of the deluge. And then I went back to my business. 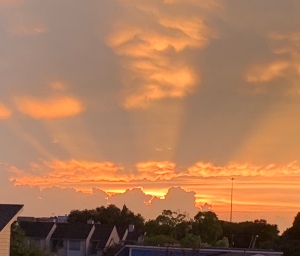 A couple of hours later, an eerie yellow luminescence caught my attention. I first saw it reflecting off of the homes south of me. I ran upstairs and went out onto my balcony and then saw 180 degrees of beauty. The sunset was unlike anything I have seen before. It didn’t look like an earth sky. The texture of the clouds, the color, the glow, it was all just a bit different than anything I could remember. I took pictures, but my phone didn’t catch what my eyes saw. It shifted, waned, and slowly faded into nighttime.

This morning’s sunrise was not nearly as unique or otherworldly, yet it was gorgeous nevertheless. I again attempted to take a picture, but again, the phone could not capture the beauty. So instead, I just sat and watched it. As the sunrise approached, the colors shifted, becoming brighter in one place and fading in others.

We are now in a new month…and it does feel different than the ones before. My experience of this passing storm feels holographic, metaphoric, symbolic, and archetypal.

It feels as if we have different layers (dimensions) of storm rolling through our lives akin to the waves on the beach. There are the smaller waves we can see that roll in like the ticking of a clock. There is the more subtle rhythm of amplification within them. Then there is the tide that slowly creeps in and then out almost imperceptibly.

All of this motion, these waves and tides, shifts the sands and transforms the beach—bit by bit by bit.

Yesterday, I witnessed a storm. The darkness, the wind, and the torrent came from the north. A peaceful, sunny, August morning suddenly raged. In the center of the storm, all was atwitter. The wind whipped. Anger was all around. The energy was powerful and I watched with awe. A short time later, all of the evidence had been whisked away. It looked calm once again, unless you looked in the right direction.]