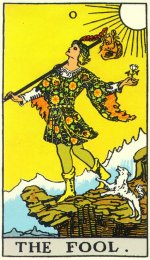 I founded A Fool’s Inclination in April of 2010, more than 10 years ago. I first started doing readings professionally in 2006 and have expanded and shifted my offering throughout that time.

I chose the Fool as part of my branding because the Fool takes life one moment at a time. He is truly open-minded and follows subtle inclinations to guide him on his journey. He doesn’t dwell on the past and he is not motivated by the future. Instead, his focus is on the wonder of the present. I don’t promise to believe tomorrow what I believe today.

It has never been my intention to tell people what to think…or what to believe in. My own beliefs have been shifting and changing quite a bit in these past 10 years. I use Tarot and Astrology often, but am not limited to those modalities, which is why I offer coaching sessions now, which aren’t based on any belief system.

My intention has always been and will continue to be to inspire thought. I sometimes do this by offering food for thought and alternate perspectives. I always encourage rising above the details in order to perceive the big picture…and to question limited beliefs and singular perspectives.

This article is not about telling you what to think (about QAnon or anything else). Instead, I will share with you my most general thoughts after investigating full time for months now.

I didn’t plan this investigation. I was led into it. In fact, I had one of my psychic nudges that guided me right at the start.

First, a step back.

Intermittently over the years, I have followed Eric Francis Coppolino and Planet Waves. Eric is an excellent Astrologer, in my opinion. He is also a journalist who’s career has been focused on investigating and reporting Scientific fraud. I followed him for the Astrology, but learned of his investigation into this pandemic and all of their findings and many of the articles and interviews they investigated as part of it. I won’t share any of that here, but if you want a summary of their findings, you can find it on his Facebook page, his website, or listen to his weekly program. I also shared a recent post on my personal Facebook page.

Just to be clear, Eric is not in any way associated with Q or QAnon (to my knowledge). He is simply investigating the pandemic.

That part started in February. Then, sometime in June, I started hearing about the mysterious person(s) who refer to himself/herself/theirselves by the letter ‘Q’. I was curious, so I started researching it. Note that, at that time, there wasn’t that much MSM (Main Stream Media) coverage.

During a typical week, I have plenty of time to research. Since I was quite interested in this subject matter, I dove in and commenced my own ‘investigation’.

I won’t tell you what Q (or QAnon) claim, but I will tell you what I think it is at this point (again, not the claims, but the general definition of ‘it’).

Q is either a person, or a group of people. I am not sure if Q has explicitly claimed to be a part of the military, but from what I can tell, it is very likely a group in the military performing an active intelligence operation, which started well before Trump was elected.

Q started posting on the internet in 2017. It is intermittent. Q often poses questions. Q often addresses “Autists” and more or less asks them to investigate his/her/their questions, clues, and claims. Occasionally Q will post actual data (rather than clues that leads to data). Q only posts data that is public domain and never what is classified.

Q has provided numerous pieces of evidence which proves (to me) that s/he/they are in fact working with President Trump.

I have concluded that Q is absolutely real. There is in fact some person or group creating these posts, who in fact are coordinating their posts with DJT’s tweets.

The term QAnon, is harder to define. It can mean any of the following:

In my opinion, it is fair to describe QAnon as a Conspiracy Theory. But remember, all theories exist until they are either proven or disproven. And a conspiracy, by law, only requires two people to be working together. So, yes, there is a theory about a conspiracy.

I see people claim that QAnon is baseless, and I disagree with this completely. Anyone can find the Q posts on the internet. They are not hidden. So the theory is based on something that exists. Whether any of this is based on truth is a valid question one could ask. To answer it requires investigation. Don’t just take anyone’s word or opinion on any of it…including mine!

At this point in time, there is plenty of evidence, and some of it, a lot of it, is verifiable. For example, on 9/2/2020, Q dropped a number of posts which identify a slew of US (state and federal) government employees, who have been found guilty of (sex) crimes (with or regarding minors). Again, this is public data and can be found elsewhere on the internet. These posts state the names of the individuals, what their previous government roles were, what parties they were in, and what crimes they were found guilty of.

I have not personally verified the data, but I do have a copy of this post in my possession. I don’t recognize hardly any of the names and didn’t feel compelled to confirm it.

I am not interested in trying to prove all of the data to myself or others. I am following my inclinations in the directions I am interested in. I don’t really have plans to do much with that information. I am not planning on writing or blogging on any of that data.

Instead, I am preparing myself professionally. If (and that’s still a big if) all or some of these claims turn out to be true, I expect many people to be quite upset about it. These individuals might need someone to talk to about it. By educating myself of the details, I will be better able to help others.

I will say this, some of the claims are very disturbing. I have seen images that are disturbing. I have cried in response to some of what I have read or seen. At times, I have specifically chosen not to look further into specific claims because I generally know what it is, and I have heard from others just how horrifying the details are. I don’t need to see these images. I’ll let these parts develop on their own.

Throughout this endeavor, I have and will continue to keep an open mind. I do not dismiss things just because of how crazy they sound. That is my approach to all belief systems and data actually. And I don’t accept anything as fact without proof. I ponder it all.

“Condemnation before investigation, is the highest form of ignorance.”

Investigation is not foolish; it is necessary…and that includes all things metaphysical. Even if one can never prove their spirituality, it still serves them to investigate it. I have done this repeatedly. I have much data to support what I believe in, including the validity or usefulness of Tarot and Astrology.

Many of the QAnon claims I had previously encountered repeatedly over the past 20 years. The claims are not new to me, although some of the details are.

The Q posts are real. You can see them for yourself. Are they true? I guess we’ll see. It feels like we’ll know sooner than later, but I cannot at all guarantee this.

The awareness of Q is definitely growing. It has grown quiet a bit just in these past months that I have been looking into it. I suspect that either it will start proving itself, it will start being debunked, or it will eventually peter out.

To my knowledge, not a single Q drop has been proven false and some have most definitely been proven true.

I recommend that if you have any interest in the subject, that you consider more than just any one perspective. Don’t just believe what you see or read in the Main Stream Media. In fact, I highly recommend that approach regarding ANY and ALL subjects. When possible, look to the source(s), not the ones merely summarizing the data. For example, I have found overwhelming evidence this year of data that goes directly against specific claims made by the MSM.

Your mind is free. There is no one who can limit your thoughts other than you. I have always found open-mindedness an asset. You choose your focus. There might be things that call to you strongly, but you choose where to look and for how long.

Your mind is powerful and it is all yours. Never forget that you are the sole owner of your own mind.