Campaigning on Mercury’s behalf does not exclude me from his mischievery (sic). Sometimes he takes you back, and at other times he stops you in your tracks. For the second time in 6 months, a fun trip has been stolen away last minute.

This time Mercury’s tomfoolery was at least amusing. With wind he knocked over a plant and strew its dirt all about, and just as my attention was diverted to pick it back up, my impish cat ran off. As I am writing this, it is not even 10:30 in the morning and already a number of things have gone wrong. Rather than resist, I have adjusted my plans accordingly. I was torn in any event.

The harm is not so much the happenings, but rather the ill feelings they brought up. After a quick look at the planets, it all makes sense. 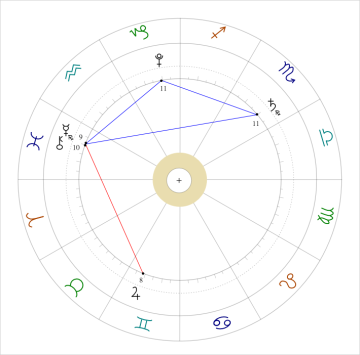 In 11 hours (9:39 pm CST) Mercury makes an exact square to Jupiter in Gemini. Since Mercury rules Gemini, he has the advantage and thus the biggest planet must defer to the smallest. The lucky intrusions will not be the fortuitous kind.

And yet, that is only half of the equation for 22 hours ago (11:32 am CST), Mercury made an exact conjunction with the wounded healer. Mercury’s mischief therefore has purpose. Keep this in mind as well: Mercury is the traditional ruler of Virgo, but Chiron is considered by many the modern ruler. Thus the two work together better than most. And don’t forget that Saturn is Trine with both nearly exact.

The Perfection of the Universe is difficult to see, thus to the uninitiated, it can materialize as an arduous task or a poignant challenge.

I only wrote that line yesterday for a different purpose and already I am experiencing it.

As they say, it’s all good. I will accept this to mean it is best I work through the weekend rather than rest. “Rest is for the wicked,” my mother has always said. And “You can rest when you’re dead,” is the philosophy of a very good friend.

Since the Chiron conjunction is waning while the Jupiter square is still building, I think I’ll work on some emotional clearing to start. That, in and of itself, will be productive.

If you find items crashing in front of you, you might want to consider going another way. If it happens four times in less than an hour, give up and go home. Something is surely waiting for you there.