… and coincident with a Mars Opposition.

In the past 24 hours I’ve had four people contact me to share experiences Abraham would label as contrast. These all have vibrational signatures that match the fascinatingly complex Astrology we have brewing and spewing right now.

The point of the analogy is not to recommend that you always travel at 2 mph so as not to get hurt. That’s no fun. However, we are driving this car and we can use our guidance—our intuition—how we feel—to gauge our adjustments. If we feel nervous, slowing down might be a good thing. Or, if we do want to continue driving fast (or even go faster), then we might want to increase our focus.

In my opinion, the energy is surging right now and still accelerating. The Astrology is absolutely breathtakingly beautiful. Just look at it! 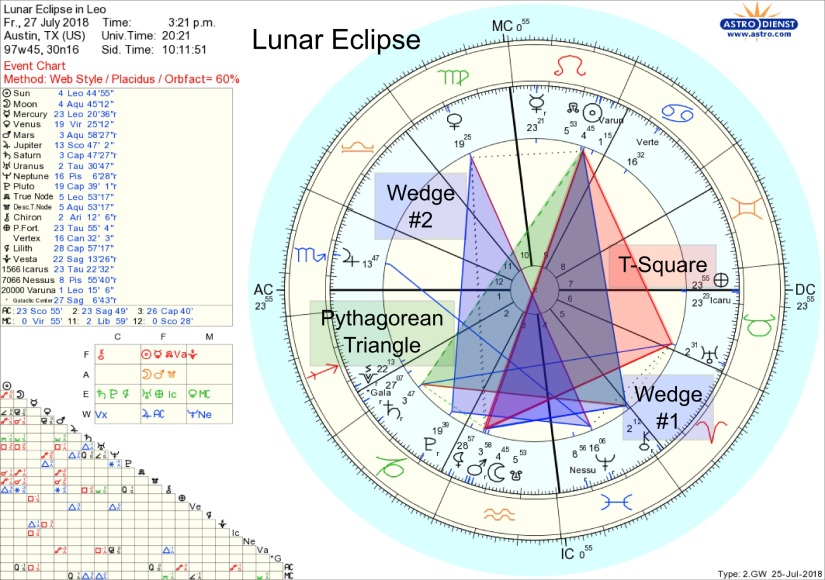 With the exception of Wedge #2 (and the Jupiter-Neptune Trine), it is all anchored on the Leo sun fixing to trample upon the North Node.

This eclipse is being reported as the longest Lunar Eclipse of the century, which is because the sun and the moon are so closely aligned with the lunar nodes. The moon is essentially passing through the center of Earth’s shadow. Furthermore, do you see that glyph just to the left of Mars and the Moon? That is Dark Moon Lilith and represents lunar apogee. In other words, the moon is furthest from the earth during the eclipse and thus appears smaller and is moving slower than it does when it is closer, further extending the eclipse duration.

The intensity of the Eclipse is due to Mars Opposition and the T-Square with Uranus, as I discussed at length yesterday.

What this chart also shows is all the support that coincides with the challenge. A Trine, two Wedges, and a Pythagorean Triangle all provide avenues for movement in and around the hot spots.

Ever since I started looking into the Pythagorean Triangle, I have been seeing them everywhere. One of the four that contacted me yesterday has a very significant one in her chart. Nearly all of the charts I featured in Summer of ‘18 has at least one. And, through my focus, I have gained more insight and another analogy.

Have you ever watched American or Australian Ninja Warrior (or Wipeout)? Often, there are moving parts that alternate as avenue and obstacle. To move forward, you have to time it right. If you jump while the “gate” is open, you can slip through. If you’re too impetuous or hesitate, you get knocked off the course.

That very thing is what is happening right now. I see it in my own experiences and in things I’m observing around me. I think the abundance of Pythagorean Triangles (due to Quincunx / Inconjunct / 150o aspects) are the reason.

Allow an aside. Yesterday I questioned why this formation is called a Pythagorean Triangle. In Geometry, the Pythagorean Theorem anchors off of the 3-4-5 right triangle because 32+42=52. The green triangle on the chart above doesn’t look like that. So I thought about it.

Well, Astrology is based on angles, not lengths. The three astrological angles associated with the Pythagorean Triangle are 90o, 120o, and 150o. If you divide all of those by 30o (the width of a sign and 1/12th of the Zodiac) you get 3, 4, and 5!

When I arrived at this thought, all of the numerology I channeled for my book Scribe to the Pantheon of Rome came flooding in. In this case, 5 is the focal point, which is what the Quincunx / Inconjunct aspect relates to, and which sets up the theme for the entire Pythagorean Triangle.

Five is the bringer of change and often when we’re either not expecting it, or when it looks different than we expected.

I think we are in a period of rapid change. Furthermore, I don’t just think this, I feel that this is true.

So, bringing Abraham back into the discussion, the collective stream is moving fast right now and we either need to go with it or pull our boat into a cove and ride it out.

Like scaling the Ninja course, if you’re timing is not good, you’ll get knocked on your ass! In fact, the manifestations I’m seeing are examples of getting bumped or even knocked down (literally falling down to the ground).

But remember, unless you get taken out completely, you’re not out of the game. Maybe your apparent progress is impeded in a big way for a while, that is not the same as being out of the race. As long as you are alive, you are in the game. So why not work with what is and refocus on where you want to go?

Brush off contrast as quickly as you can. Even if it caught you off guard, turn your sights forward as quickly as possible. Ask yourself: “What do I want from here?” Don’t waste time thinking about the plans that got spoiled. Just accept that there is a new course ahead and it might be through a detour that seems the only option right now.

Remember, this eclipse is the second of THREE. Furthermore, Mercury stations retrograde today and Mars will not station direct until August 27th. I also noticed that Mercury stations direct on August 18th, which is the same day (depending on your time zone) that Jupiter and Neptune Trine exactly.

If your “gate” is open and you’re feeling frisky, go for it! If it doesn’t feel right, wait for it to come around again. And if you’re sitting on your butt, having been knocked down, make the best of it. Catch your breath, regain your strength, convalesce, and/or wait for help. Falling hurts our bodies, but sometimes hurts our egos more. The body might need time to heal, but you can brush off the ego bruise as quickly as you want. The over all opportunities are not gone for good, they’ll be back. Catch them next time.