Jupiter takes about twelve years to travel the full Zodiac. This means it spends about one year in each sign. If we wanted, we could create a Jovian Calendar based on this. With Jupiter just entering the sign of Sagittarius on November 8, 2018, we could call this the start of the Year of the Archer.

Given that Jupiter rules Sagittarius, this would also be the start of a new duodecad (12 years). 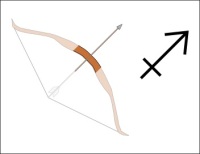 In celebration of the Year of the Archer, I was inspired with an analogy. We all know that an archer takes aim at a target. The symbol for Sagittarius is an archer, who happens to be a centaur. The glyph (right) emphasizes the arrow and the bow (only a small segment of the bow is shown on the glyph).

Now let’s compare a couple of drawings. In this first one (left), the archer and the bow are both relaxed. The bow maintains its natural curve and the string is straight. It is taught, but not tense.

In this next illustration (right),

the archer has drawn his arrow. His stance is deliberate. His left arm is held firm and his right arm pulls the arrow into a full draw. The archer, the bow, and the string are all filled with tension. It takes strength to hold this pose steady. If one holds it long enough, they’ll feel the heat and the burn.

The following drawing (below) analyzes the entire process of shooting an arrow. The archer, by pulling on the arrow and string, creates tension, or what Abraham would call resistance. The archer pulls in the opposite direction of the target. 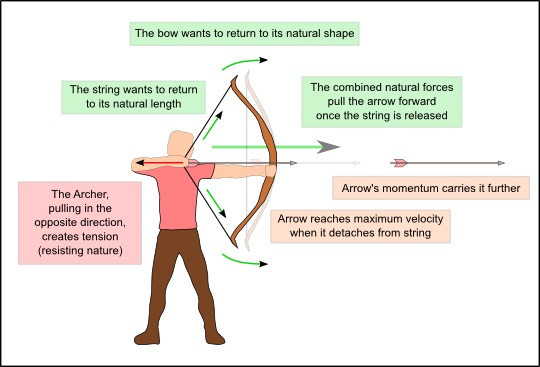 Notice that it is nature, which propels the arrow. Both the bow and the string wish to return to their natural state (in other words, relaxed). The combined force, propelling the arrow forward, originates within the atoms (of the string and bow) themselves. Matter holds its shape due to these minute yet powerful internal forces. Man creates resistance, and nature responds.

This process is a perfect analogy to how the Law of Attraction works.

You are the archer. Your desires are the target. Whenever you feel any kind of negative emotion, you are pulling away from your desires. Just as the Archer does when pulling on the string, you feel tension in your body (as anxiety, stress, anger, frustration, or any other negative emotion). When you hold onto this tension long enough (by frequently thinking thoughts in opposition to your desires), you become tired and eventually exhausted.

If you consistently feel stress, anxiety, tension, doubt, fear, anger or anything similar, all that is needed is to let go of the string. Let go of the focus (on that which is not desired). When you stop pulling against nature, then the natural forces of the Universe, as illustrated by the bow and the string, accelerate your arrow in the direction of your desires. Once the arrow is released from the string, the momentum it gained will carry it forward.

When you accept the Law of Attraction and practice moving toward alignment, it is easy to stress over those times when you don’t feel good. In other words, you feel bad for feeling bad. In this regard, you pull harder on the string just because you’re mad at yourself for pulling on the string.

If you remind yourself that you are an archer, then you can begin to let go. You can at least let go of fretting over your worry.

Also notice that the Archer must let go of the arrow in order to hit the target. It would be no fun for him to walk that arrow all the way down to the target. Furthermore, he doesn’t attempt to control the arrow mid-flight. He simply draws, aims, and lets it go. More accurately, he aims first (in a general way), draws the arrow, refines his aim as needed, and then lets go.

Negative emotion, and the pulling on the string that causes it, is creative! It is the point…the starting point. Letting go is the next step. The further back you pull, the more tension you’ll feel, but the more momentum you’ll create once you do let go.

It is easy to apply this to the negative thinking that creates stress. It is harder to accept around negative occurrences. The other day, it occurred to me that all of the recent California fires started the very day Jupiter entered Sagittarius. Yes, real life events have a way of inspiring strong fear, stress, and anxiety. They force us to let go. People die and possessions are sometimes lost, flooded, burned, or stolen. But don’t start there. Start with easy things and see how it goes.

And no analogy is perfect. In real live, you can always move in the direction of relief. You can lessen the pulling even if you are not ready to completely let go. The point of this article is to ease any stress related to the worry that we’re doing it wrong. We can’t get it wrong. One way or the other, creation will happen.

Archers shoot arrows. It it what they enjoy doing. They shoot and shoot, honing their aim. What they don’t do is draw an arrow and hold it that way indefinitely.

Be the archer. When you notice the tension, and feel the burn, (remind yourself to) let go. Life will cause you to draw a new arrow. Don’t worry, you’ll never run out of them. Let them fly. You’re gonna miss a few times. With practice, you’ll start hitting the bull’s eye.